This morning’s Daily Telegraph reports that a couple in Rotherham, acting as foster parents, have had their foster children removed by Rotherham Social Services. Why? Criminal record? – No! Child abuse? – No! Why then? – Because they are members of UKIP which the ignoramuses at Rotherham BC “after careful consideration” (as if!!!) consider to be a racist party. By the way the action was apparently triggered by an anonymous tip off.

You only have to read this blog to know the views I have held about UKIP.  I have long believed that it damages the very things it claims to stand for by creating division on the political right. However there is no way I would accuse it of being xenophobic or racist – nor would I consider that membership is a proper concern of the officials of Rotherham BC – or any other public official. This action is of a piece with the Trafford Housing case reported the other day and is further evidence that the Liberal Establishment becomes more Stalinist by the day.

Having said that I am also concerned to read that Lord Carey seemingly wants the Church of England to flout its own constitution to consecrate women bishops in spite of the failure of the Measure to pass Synod this week. More ministers and MPs (nominally Tory ones at that) have also joined in the hysterical outrage and want the Church to change its voting system so as to produce the outcome they want. Shame on them. For what they imagine to be political gain they flout every Conservative principle in the book. I was struck by the comment of a Greek Orthodox priest who says that the Synod members prayed for the guidance of the Holy Spirit but then refused to believe that He had answered their prayer.

St. Paul warned against doing evil that good may follow. In humility let all reflect that the good they wish is only good in their eyes and that God, whose ‘thoughts are not your thoughts’, might see things differently.

With kind regards to Cornish Republican, these birds feature in a mosaic on display on the Canary Island of La Palma. Saw them there last week. 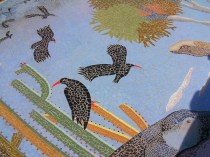 The failure of the House of Laity of the C of E Synod to support the consecration of women as Bishops has provoked the reaction from the Liberal Establishment that was to be expected.

As a real, philosophical Conservative I cannot suppress a feeling of quiet satisfaction that someone has had the guts to put a spoke in the wheel of ‘progress’ that so many Establishment members think moves in one way – namely the way they want it to.

I don’t propose to discuss here the rights and wrongs of the ordination of women or the internal affairs of the Church of England, of which I am not a member. But I am concerned about the hysterical nature of much of the reaction.

We are led in the media and in politics by neo-Hegelians who can’t imagine that any sane person disagrees with their world view.  Anyone who does disagree with it is evil, not ‘with the programme’  and must be suppressed, ridiculed and punished by Law. Thus the Prime Minister dares to say that the Church of England needs a kick in the pants or some such. And some of his parliamentary colleagues, like Frank Field, who should know better, are considering extending the Equalities Act to the Church to punish its lay representatives for exercising the freedom of conscience which is supposed to lie at the very foundation of our democratic society.

Only the other day we heard of a senior employee of Trafford Housing Authority who had been demoted at work for criticising gay marriage proposals on the internet. The action of his employer was not sustained by the Employment Tribunal to whom he took his case but the fact that he had to do this and that his employer had seen fit to act in this way should be a wake-up call to all who believe that we still live in a free country and can take that freedom for granted.

Sadly we can’t! I increasingly wonder how far, if at all, we can rely on our elected representatives to protect our freedom to say and believe things that threaten no-one but don’t entirely accord with current fashions or social mores.

‘Freedom’  says Winston Smith in 1984 ‘is the right to say that two plus two make four.’ In other words to speak the truth as one sees it without fear and without requiring the permission of the State to do so, even if it does involve disagreeing with David Cameron and Frank Field from time to time or with policies with they advocate in the name of ‘progress’ or ‘equality’.

I thought everyone knew that the Sub-Continent is famous for producing spin bowlers of all kinds, off, leg, wrist, fingers – whatever. It does this because its wickets are, by and large, very receptive to spin bowling.

It seemed the England selectors had got wind of this when they selected Panesar alongside Swann backed up by Patel and Pietersen as necessary. So why on earth is Panesar ‘on the subs bench’ while we play three seamers/swingers in Anderson, Broad and Bresnan? The consequence of this folly is that England are now following on, having let India make well over 500, exhausting A, B and B in the process, then getting bowled out by India’s spinners for 191.  All the Indian wickets to fall bar one went to Swann. Good for Swann’s figures, no doubt – he’s now topped Laker’s total, I believe. However, in his glory days with England, Laker bowled with a partner in GAR Lock. Would we not have done better to partner Swann (off) with Panesar (leg) with aggressive fields early in the Indian first innings?

The question answers itself really!

Back in February I suggested that Cameron was trying to come to terms with the constitutional mess Blair created. I hoped that was the case.

Instead he has created a further mess of his own.

The Scotland Act gives the Scottish Executive no power whatever to alter the constitutional arrangement thereby established – whatever Salmond and the SNP may say. He simply doesn’t have the power to hold a Referendum on leaving the UK and, if the Rule of Law means anything to it, this Government should simply have told him that and enforced the Law if he defied it.

Instead, Cameron has chosen to put himself on the back foot by conceding a Referendum (on whose authority, by the way?), trying to present as a triumph the ‘insistence’ that there be a straight In/Out question on the ballot paper. Meanwhile he gave a good impression of Neville Chamberlain visiting Munich, dealing with the would-be Fuehrer of Scotland for all the world as though he was a foreign potentate to be appeased.

How did he do this? (1) by conceding a Referendum at all; and (2) by allowing Salmond to postpone it until 2014, thus causing two years of dithering uncertainty about the very existence of the UK as an entity in the future.

Some Scotsman should seriously ask our PM the question: “Does yer mither know yer oot?”